I was asked to recolor a boat.ai and boat.gif for Maddie and Marianne. There were three suggested colors, so I just made 3 versions of the boat (options!).

Recoloring them was pretty simple, and I also learned a bit more about Adobe After Effects in the process. Recoloring in AI was simple, but AE required some more digging, but in the end it came out very clean!

This past couple of weeks I’ve been working on a basic training assignment in my spare time. I learned more about different historical art movements and was tasked with designing a graphic in my preferred movement. I chose Bauhaus because I liked the geometric shapes, and I recognize it from my past Art History courses. I first followed the Youtube tutorial link so that I would know how to create Bauhaus-like shapes and text. Then, I created my own graphic based on what I learned. I made it about the upcoming album release of one of my favorite artists, 5 Seconds of Summer. Although alongside the tutorial-based poster, mine appears more minimal, I think it contains just enough elements to be identifiable as derived from Bauhaus. 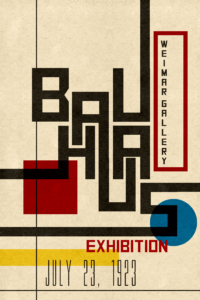 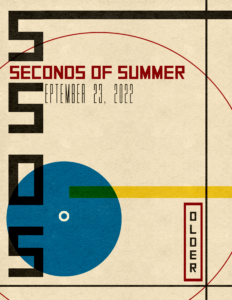