A lot to cover today!

At the very start of the week, I wrapped up the last part of my Cascade test site, adding buttons I had drawn in Photoshop the previous Friday. 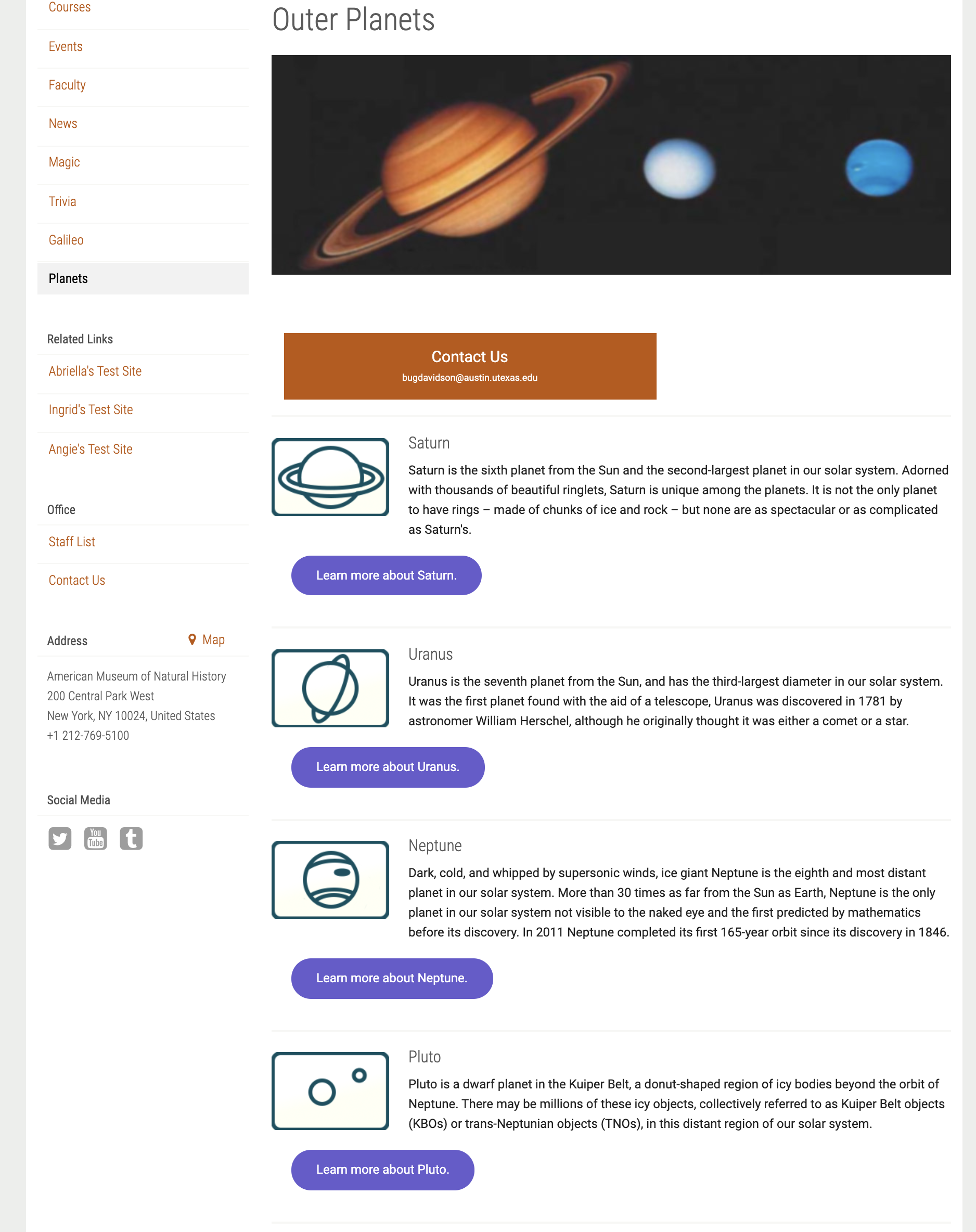 Most of this week was spent working on my Pages training for the COLA Web Refresh Project. Pages, as you may know by now, is a new CMS the COLA website is being migrated into from Cascade. The first part of this involved creating a personal site about an interest or hobby, and much like my Cascade page, I chose a natural science theme. Though for this one, I started with a homepage providing some basic information about myself. 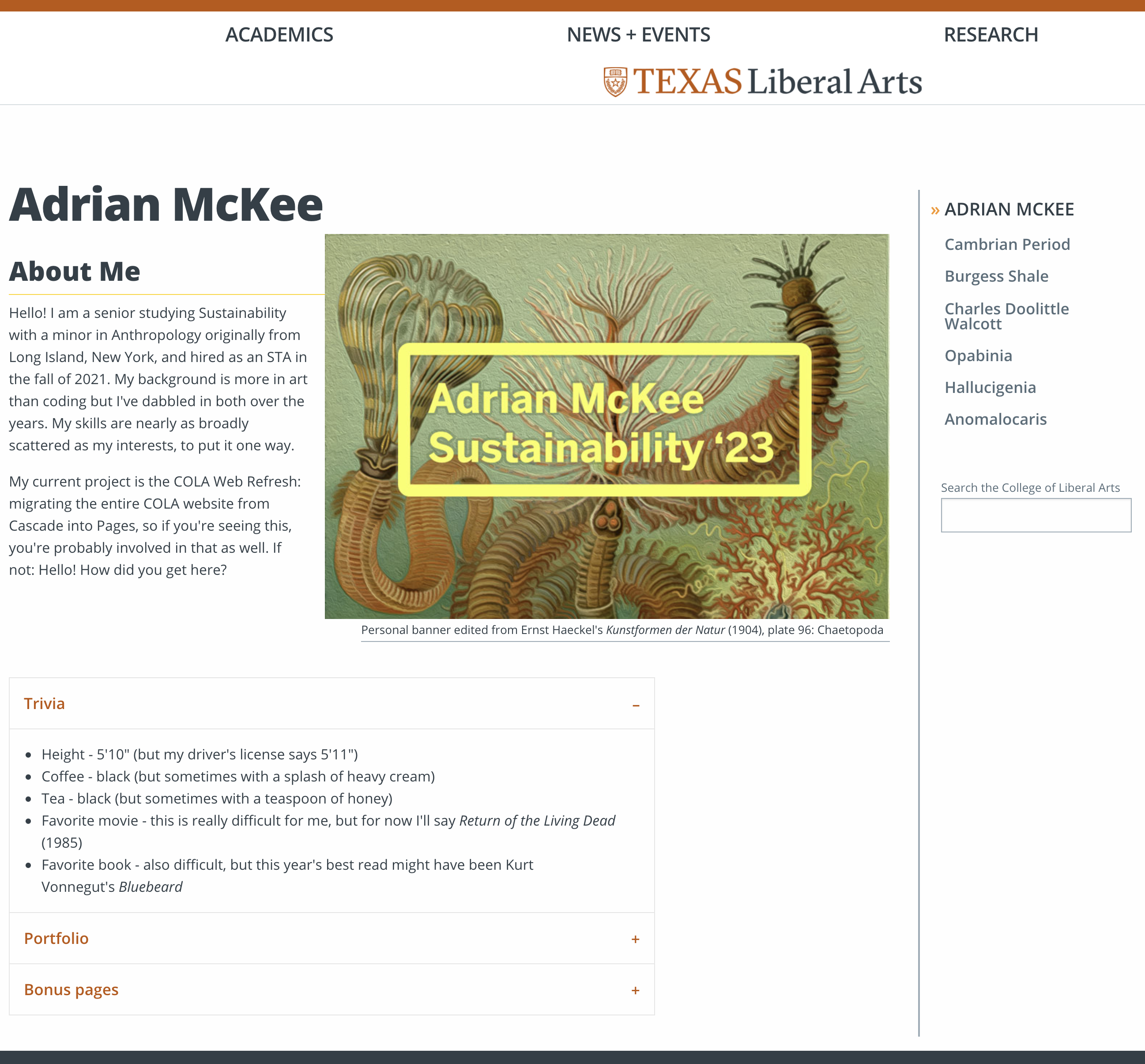 Nested below this, I created six other pages for a paleontology-themed info portal (sorry for the plagarism, Rahul, but I did do a different era). This included a “hub” with links to five other pages, mostly in order to use all the text and image formatting features of Pages without cluttering them all into one page. 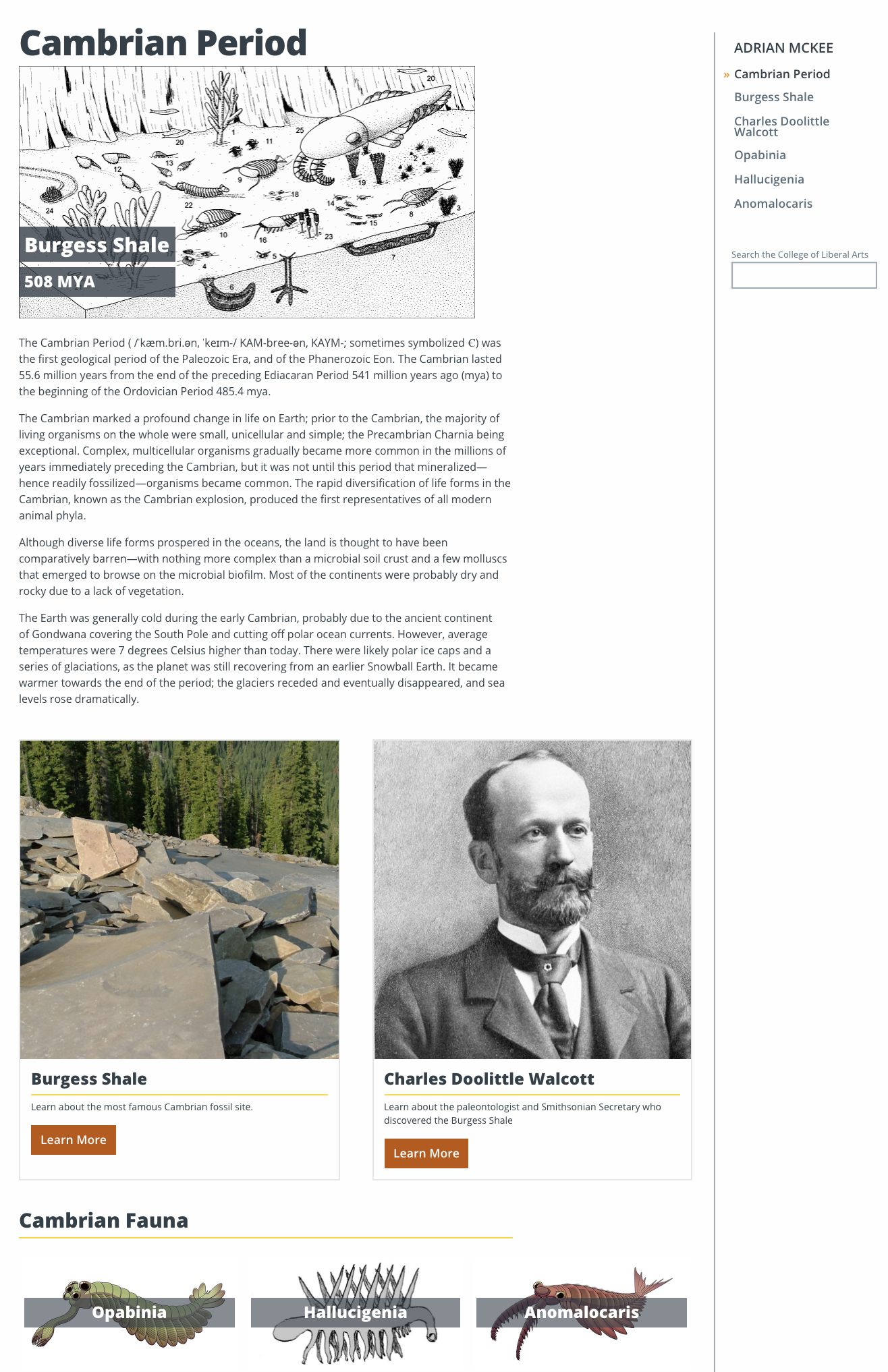 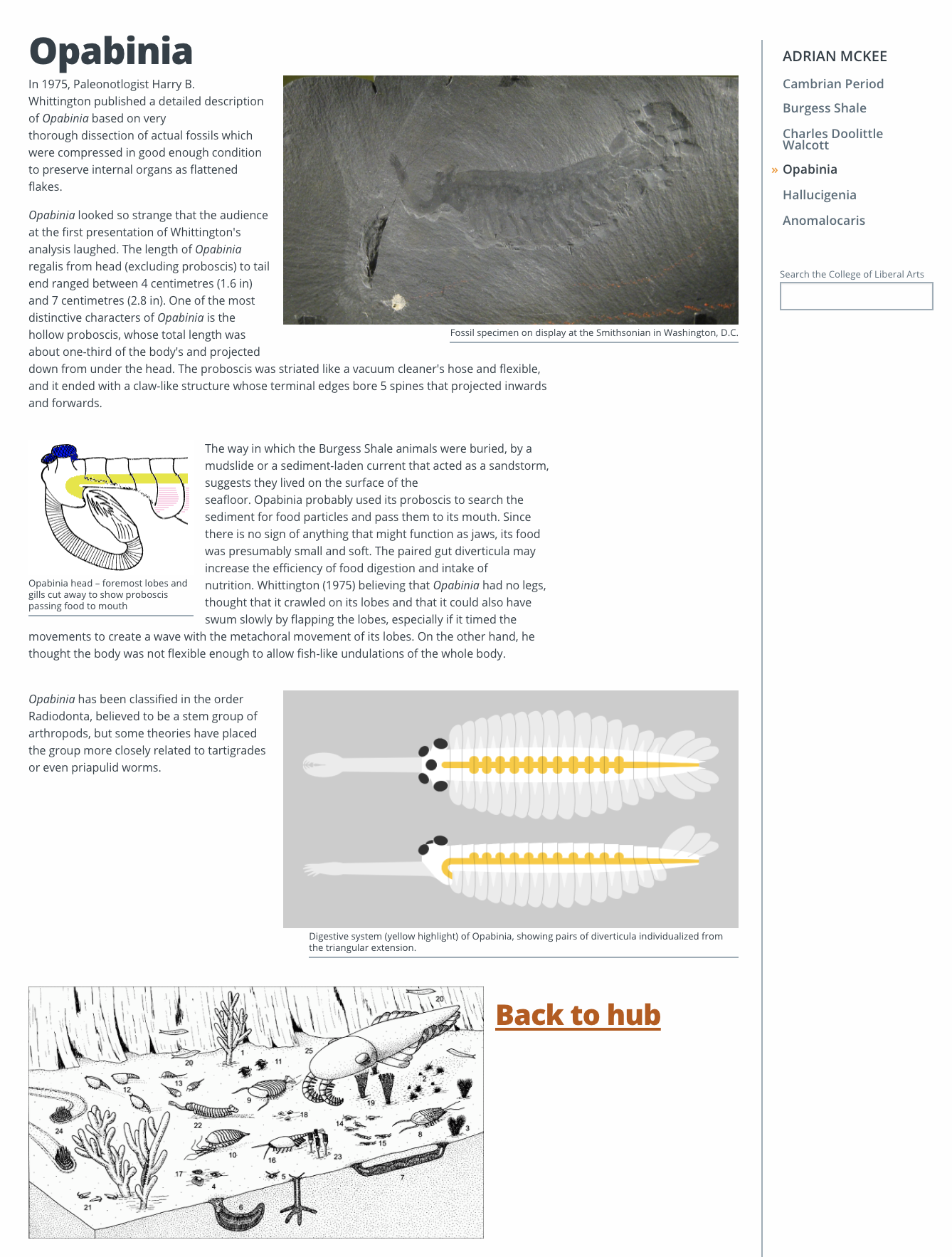 I found the limitations of Pages quite apparent, such as the difficulty displaying images with much freedom. I tried embedding an image into a tab using html which promptly deleted itself, as well as creating an image button with a single line of text (this will show up again later!) to no avail. I will say I got everything done much faster than I probably would have in Cascade, albeit with less creative freedom.

My next assignment was to compose a formal writeup email on my project so far, which doesn’t have much information not already in this blog post, so I’ll omit it.

After that I began practicing transferring content from the old COLA site into pages, rewriting ten in total. 80% of it was very straightforward (copying bodies of text and reuploading header images) but 20% was quite time-consuming in that it took a lot of mental energy to rework complicated pages into the more limited framework of Pages. One page (shown below) included a slideshow of different images, links, and embedded videos at the top of the page, of which no analogy exists in Pages. 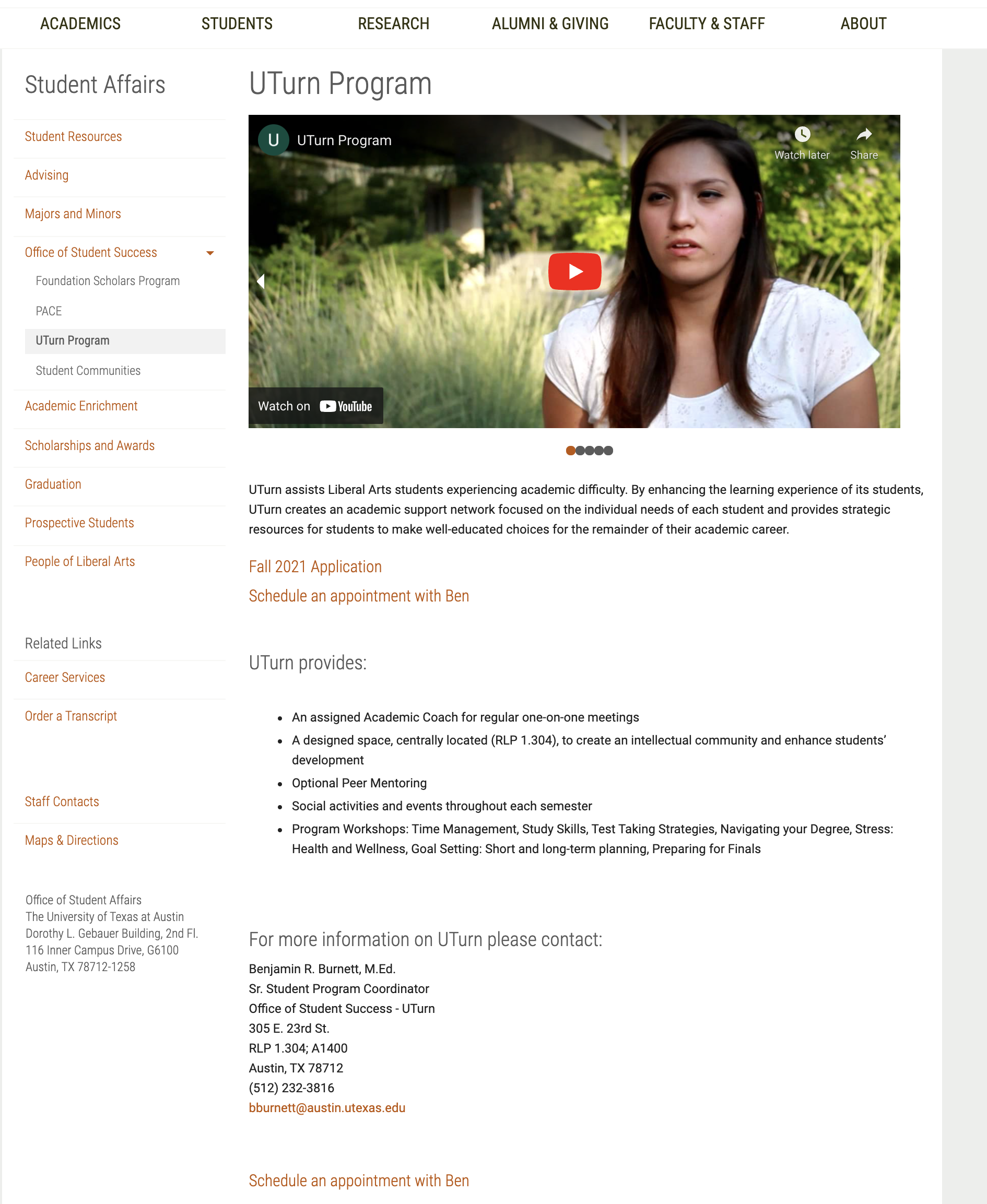 The most tedious part was finding a way to insert two images with single-sentence captions (There it is again! Grrrrrr!). Since Pages has no option for a single image with a single line of text, my attempts included: 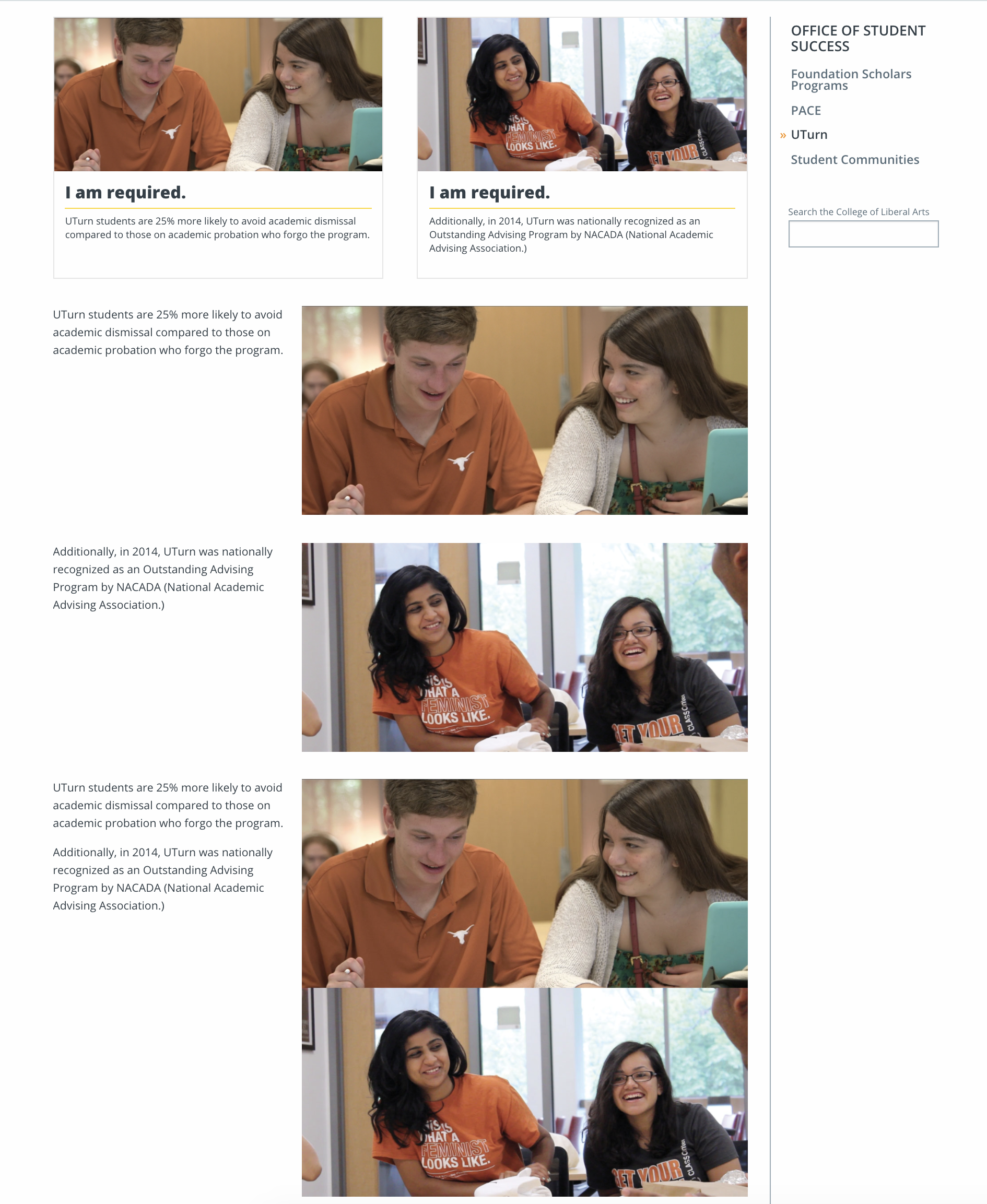 Several of my miserable attempts.
Finally, I settled on using the Photoshop-combined image as a single “Callout” card, with one caption as the title and one as the body. Note the differences in the final site layout from the original. 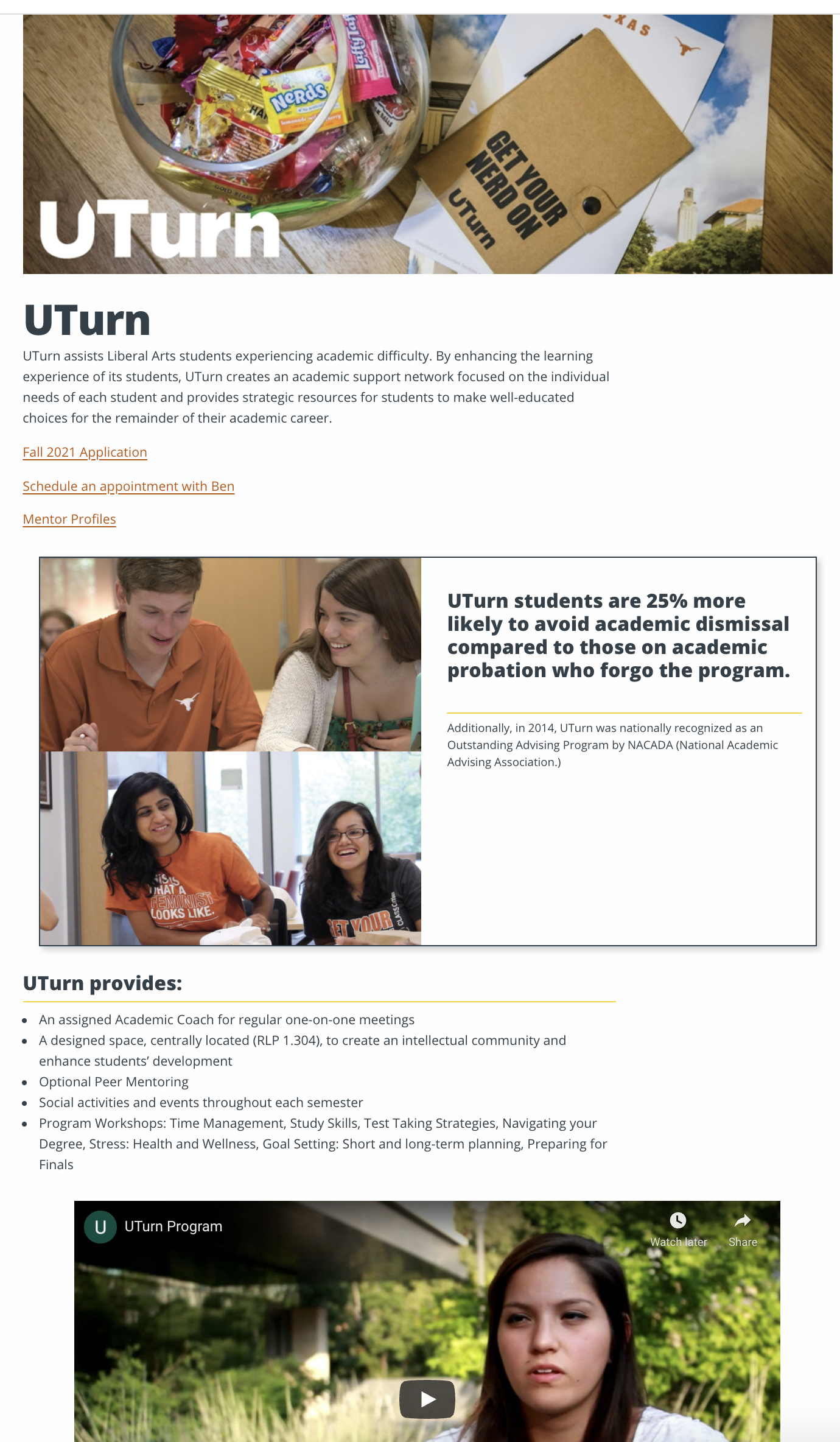 Housekeeping
I’m also including brief coverage of two basic trainings I forgot to cover last week.
One of these was a brief read on professional email communication, which I don’t have much to report on.
The other was an exercise in understanding web accessibility standards. Part of this involved finding two sites and contrasting accessible and inaccessible design, so I contrasted a Norwegian garden store site so messy it became an internet meme, and a very Web1.0 science fiction blog dating to 1995 which, though gaudy, met most of the basic standards.

I’m still getting through a lot of different small assignments, so hopefully future blog posts will be more streamlined. One very last note: on Wednesday, I took some time to draw a caricature for the STA banner, as well as my own banner entry, which will remain secretive for now since I don’t know if the ballot is blind or not, but I might demonstrate my process in a future blog post. I’m excited to see everyone else’s entries! Signing off. 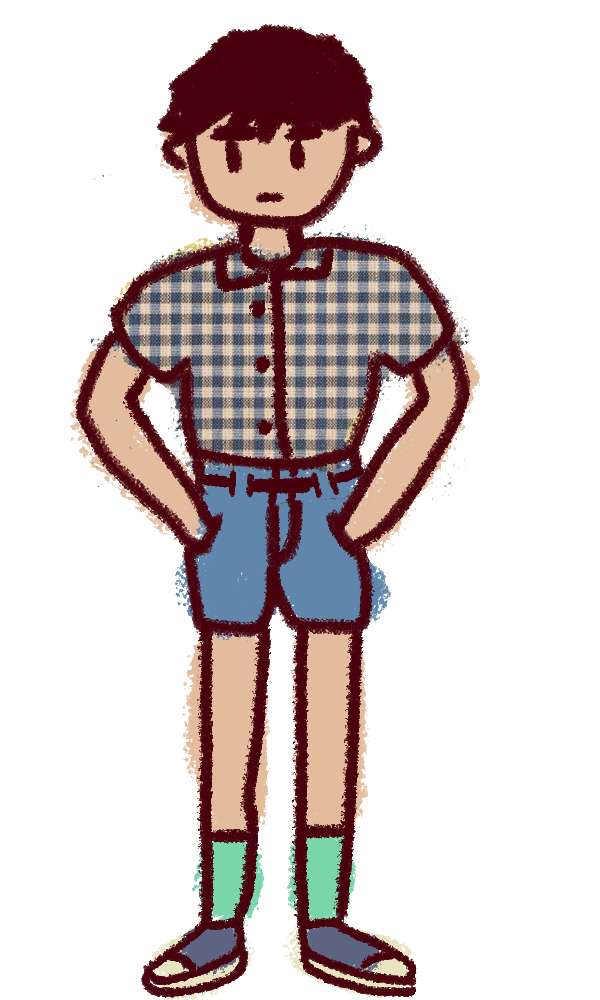