This week, I took over Angie’s project in creating two icons for a Skill Lab and a Debriefing section for COM 302 lecture slides. From what Abriella asked me, I researched some icons in the Noun Project to help me get started on something that could graphically represent these two concepts. Below are some icons I considered:

Once the client approved of the 1st and 4th icons, I created the assets for the lectures in the same style guide that Angie had been following:

During the beta testing of the Video Manager, Poonum and Ruben asked for the creation of new icons for the video manager. Here are the original ones:

The request called for new icons for the following actions:

In following a proportion similar to the one that Apple uses for their iOS icons, I created new icons that aim to be graphically intuitive and simple to understand. Here are how they look on their own and in a mockup screen: 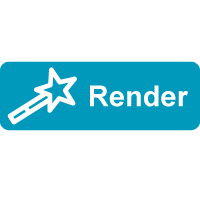 I had a really fun time watching others STAs present the projects they worked on throughout the last semester. Here are the slides that I presented for mine, which covered the design of the ISPRII Logo:

After multiple iterations and feedback from Aidan, it looks like we’re in the final stages of the graphics for Design Principles & Causal Inference and Data Exploration and Visualization. Here are two candidate animations for each course that I’m waiting for Aidan to approve: