For my previous ornamental design, I simplified the look with the feedback from suloni and mike. I made a more wooden version of the design and put it in a template for testing. I also created another slide design with birds and had it on one side of the slide instead of a border.

I made more powerpoint designs with the common theme of anchors and the sea as suggested by mike. There are 5 different types of slides for different kinds of information. I tried to find patterns or designs that were repetitive and a bit less decorative than my previous ornamental designs but still border-like. A concern I had was if it kept to the russian theme. Mike, the project manager for this project, approved the designs with the wave border on the sides, the wave border on top, and the main wave pattern for the main page. I created a wooden version of this template for testing.

Powerpoint designs as of Oct.2nd 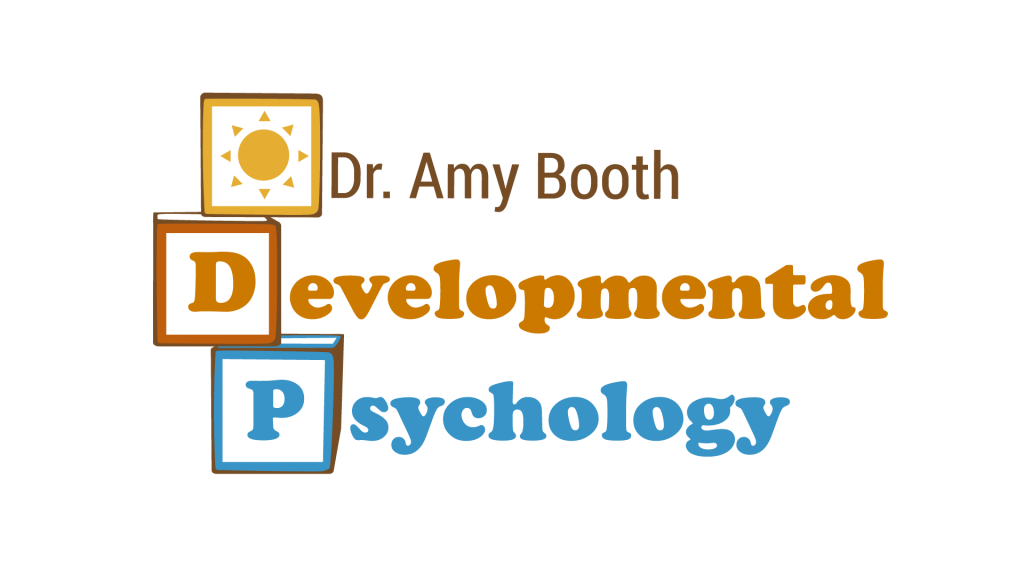 Finished deciding on the colors for the characters. Rough version of animation video. 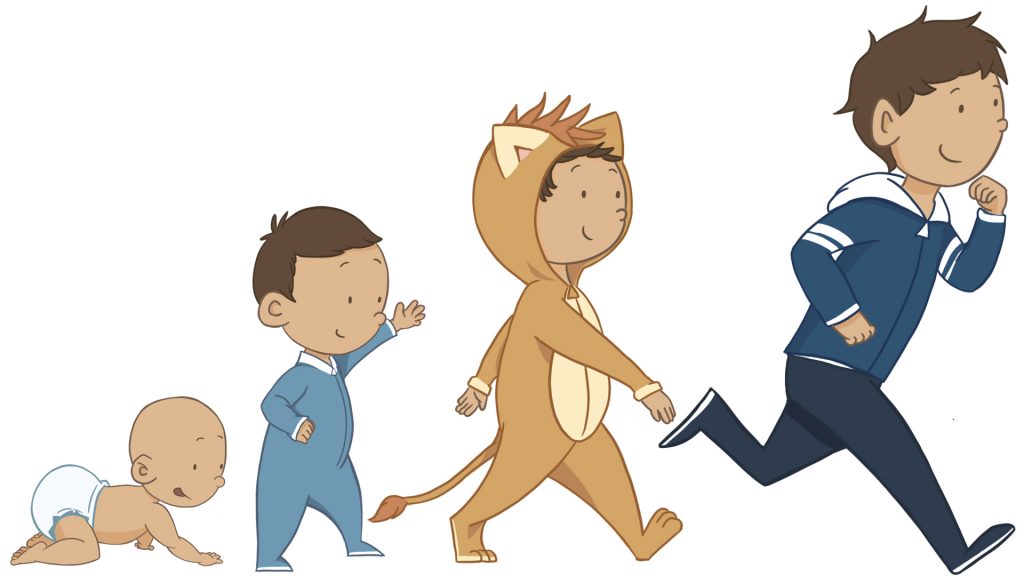 This was the video put together with Anna’s and my illustrations. After completing the video I sent it in get edited by the audio department.

Texas Beyond History was a project I worked on for some time during the Summer. There are hundreds of page that migrated from an old site that needed to be formatted correctly to the new wordpress site. The other STA’s and myself had to go into each page and fix anything that changed during the transition to the new site. This included, fixing the placement of images, checking for broken links, checking the text and captions of images, and more problems we later came across. The original site was made in 2001 and a script was made to move all the pages from the old site to wordpress however because the original sites used all kinds of different coding techniques, there were a lot of problems that had to be fixed within each page. During the summer I was able to format 47 pages. Each time, something new would need to be fixed and I had to go back to the ones I previously completed and fix the new problem in those too.

Another job we have as Student Technology Assistants is helping the faculty, staff, and graduate students of the College of Liberal Arts update their photo ID’s onto the COLA website. For Faculty and Grad Students, we make 200×300 profile Images as well as 80×90 icon images. Staff members get the 80×90 icon images. Some images we receive are professionally taken at the LAITS studio by one of our STA’s or elsewhere and need little to no change. However, sometimes we will receive images that need a bit more adjusting. Our job is to take these ID’s , make appropriate changes when needed, upload them onto the website, and finally contact the people who sent the photos and let them know that their request has been completed. 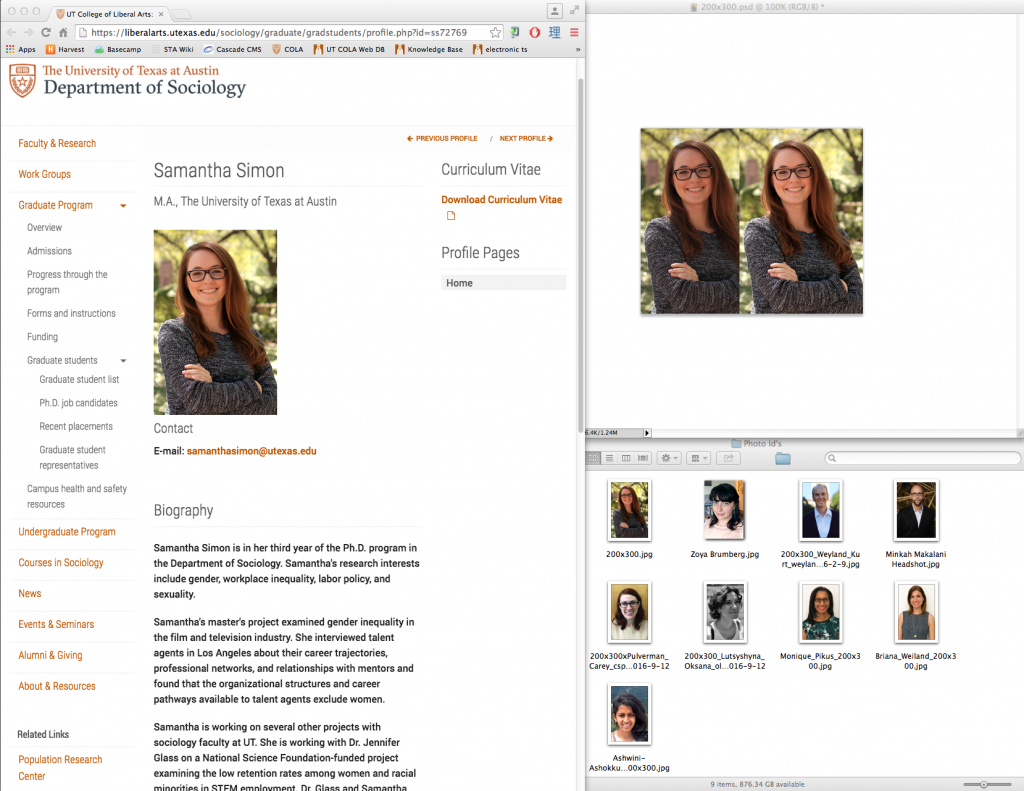 Request: Our department was approached by Professor Kappelman on creating a supplementary graphic to his discovery in the death of one of our earliest ancestor, Lucy. The graphic initially was meant to be an image portraying the fall of Lucy however throughout the weeks, the request changed from 1 image to 3 to 5 and then finally 6 depicting the different stages of Lucy’s fall. The change in request came from the realization that one image would not be enough to accurately present the fatal impacts to Lucy’s body since they occurred one after another at her point of impact. Each image was meant to show a fatal blow.

Lucy, A Pliocene fossil is one of the oldest and most complete fossil hominin skeletons discovered. She is an important source of information regarding bipedal evolution. Her anatomy has characteristics similar to both human and a chimpanzee. Her bones show that she was a biped meaning she walked on her feet.  Her knees were close together causing her legs to be at an angle which resembles humans. Her skull was similar to a chimp in that it was elongated with a small brain case (see video below) with the face and jaw coming out of the brain case. Her shoulder blades suggest that was suited for climbing trees and also had long arms with curved fingers.  However, Lucy also had a spine connection supporting her head and a broad pelvis like a human. Her arched feel also supported the idea that she walked like a human. All of these were facts I gathered from the video I found on youtube by the California Academy of Sciences. I went through many sites looking for more information about Lucy’s anatomy to ensure that I was able to draw it accurately.

Some references I looked through at the time:

3 & 4.) Video regarding information about Lucy’s fossil

I also consulted with Professor Kappelman many times about the proportions of her limbs in relation to her body and about how her body must have been positioned at the time of the fall. Professor Kappelman sent me many photos of a reconstructed Lucy to get a better ida of how she may have looked, as well as images of chimps for getting a better idea of their limb proportions, and also sent me photos of people falling from different heights and how they may have tried to position their arms to stop the fall.

This project was something very difficult to do. Lucy, has anatomy that is different, and my job was to draw out her impacts based on how her anatomy was. Professor Kappelman and I had to pose many times in the lab to establish how she may have been positioned at different impacts. However, Professor Kappelman’s frame was too tall and long for it to be an accurate representation, and while I am short at 5ft, my limbs are still different from hers and still wasn’t very accurate. However the posing helped me  to get an idea of how to approach drawing her fall.

Rough sketches at the beginning of the project. At the time  I was only meant to draw 1 image rather than the  6 that was decided on in the end.  The first was my first rough, the second and third were fixing the position of the limbs and trying to get the anatomy correct.

At this point, we had already taken pictures with Professor Kappelman and I as models for references in the positioning of Lucy’s body. The image count went up to 3 by this point highlighting the most fatal blows. Here it was to show the impact of her landing feet first and causing the break on her knee. I drew roughs over my body in the pose. However, this isn’t very accurate since we can’t actually record myself falling and my leg limbs were to long to accurately show the position of the leg during impact. 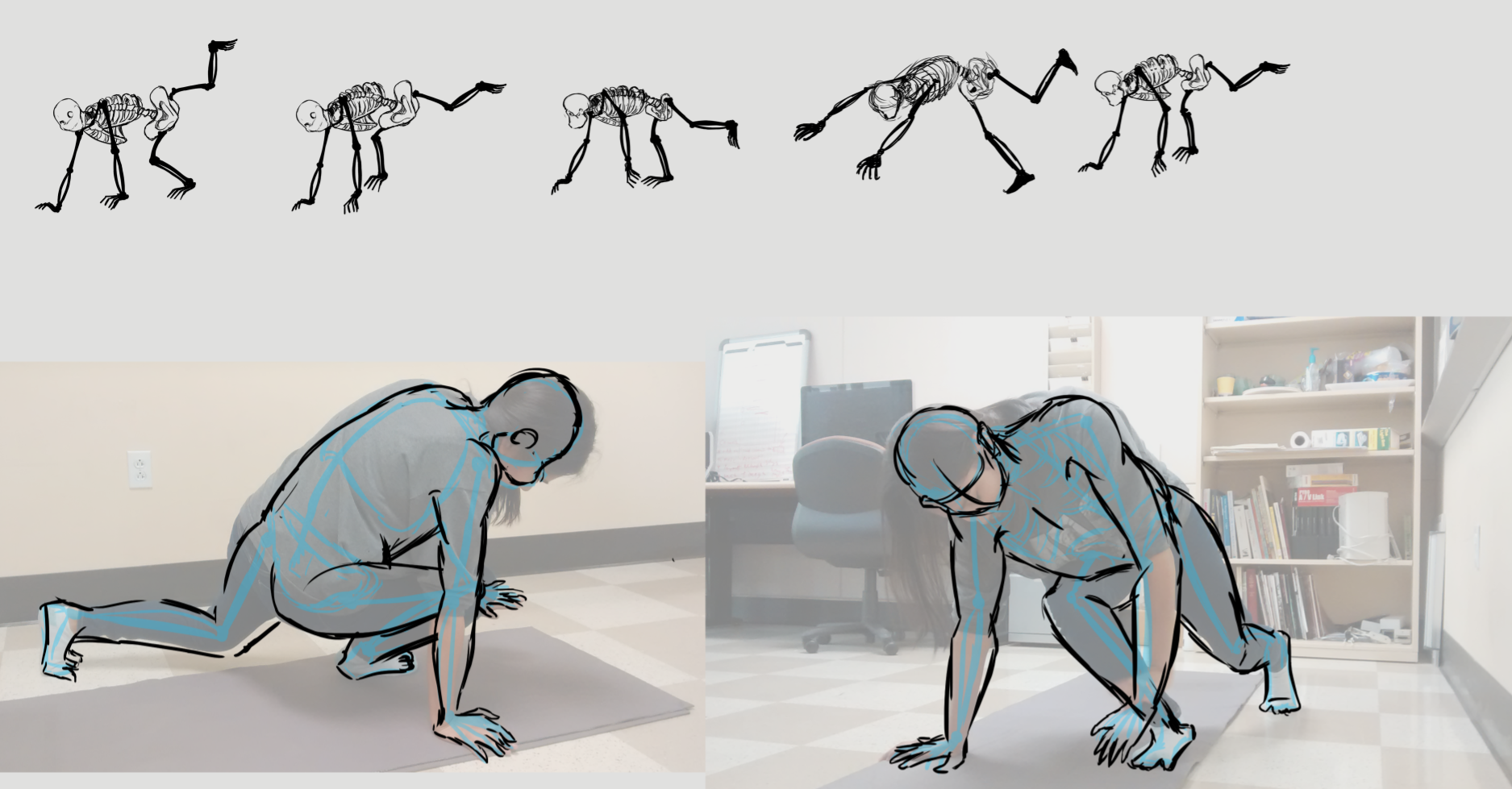 After consulting with Professor Kappelman, the positions began to shift as he started to connect more the injuries together. With an art model he tried to show me a more accurate view of how she may have fallen.

More models were made along with more research and more meetings with Professor Kappelman. Suloni (Project Manager) suggested I made wire frame models so that when I met with professor Kappelman, he would be able to show what positions of Lucy he wanted me to draw.

The most difficult part of this was trying to decide which perspective to show her fall from. Lucy suffered injuries to both sides of her body when her body twisted under while making impact to the ground. 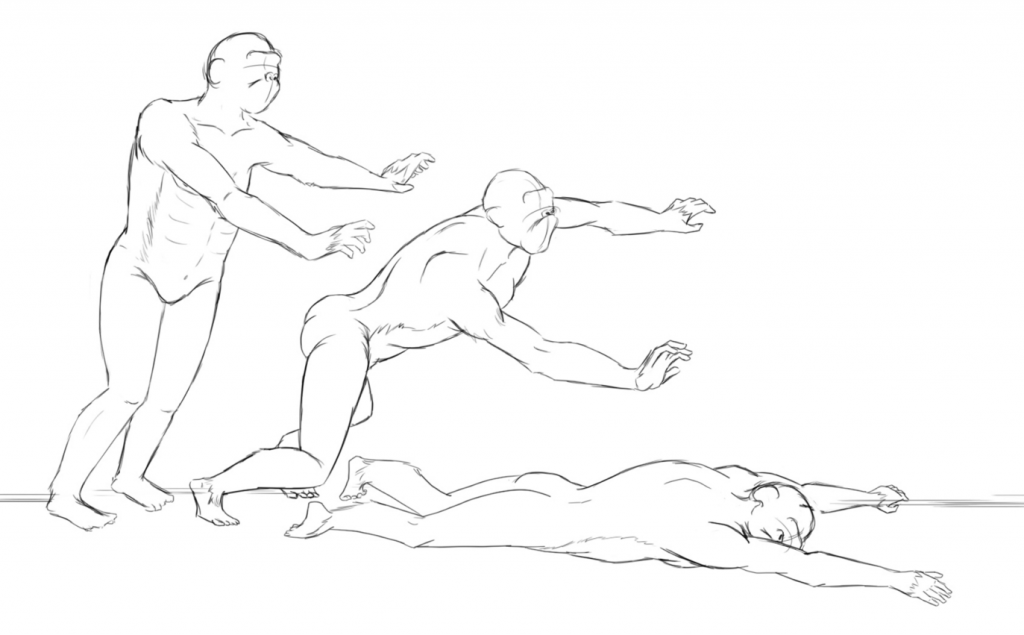 At this point, I tried to get Lucy’s form but there were somethings that came out a bit strange and still needed to be fixed. A problem we had with the chosen perspective was twisting Lucy’s “standing form” enough that her leg covered her private areas while still showing enough of both legs and arms. There is apparently an unspoken rule about showing female genitalia in scientific journals. Finally after so many draft and iterations, I had a rough of what was now 5 drawings since at the time Professor Kappelman was able to make new connections to certain injuries and wanted to show them as well. 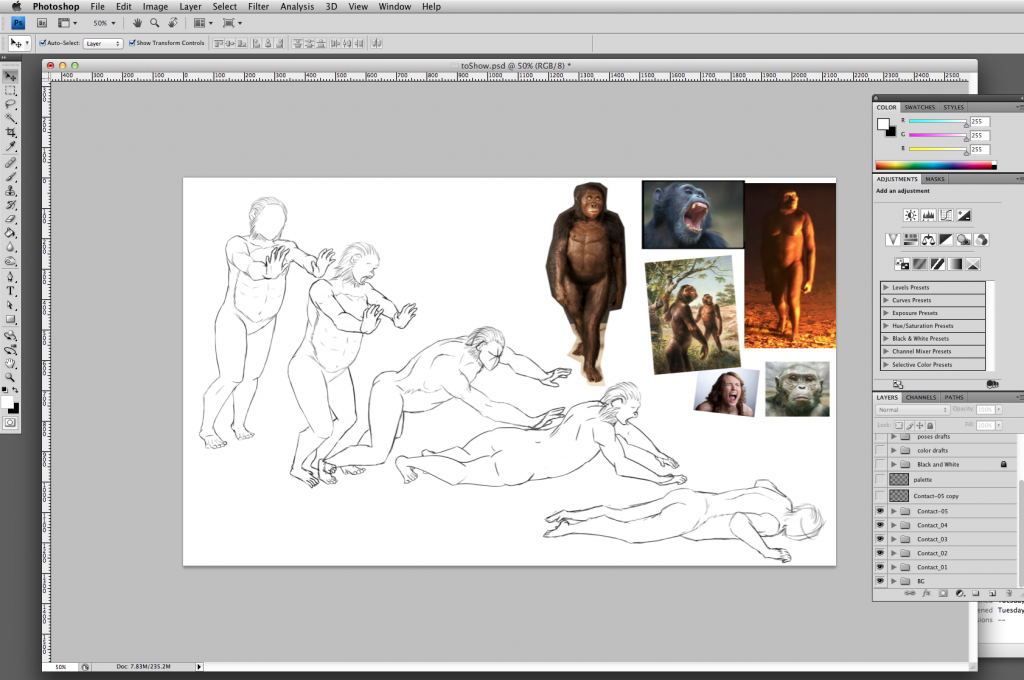 From there, it was a matter of fixing the details. Each time I would draw a draft and Professor Kappelman would let me know what needed to be change. Lucy needed to be less muscular, her arm needs to be moved a bit, rotate the head, fix the length of the torso. After each draft, we were able to finish an image that we were satisfied could depict Lucy’s fall.

Lastly after submitting my Lucy illustration, Professor Kappelman took the illustrations of each pose, added images of the breaks to her bones, and made the animation that was featured on Nature Journal and many news outlets. 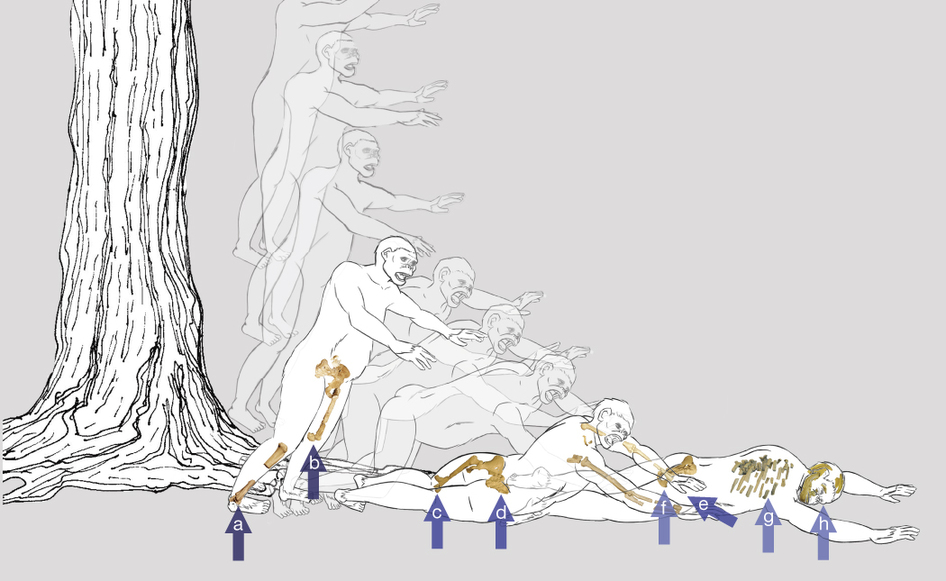 Overall, this was one of my biggest projects as an STA. I had the opportunity to work on a scientific discovery with a notable Professor as my client and had my illustrations published on a renowned scientific journal as well as on many credible news sites. It was difficult for many reasons. At the time, it was essential to keep the discovery of Lucy’s death a secret and so there was a rush to get all the materials ,that was to be published, completed as soon as possible to ensure that the secret stays a secret until its final released. I had to do a lot of research of the anatomy of both chimps and humans and specifically Lucy. I had to get the position and placement of her limbs accurate which meant making different kinds of models, even modeled myself, to get the placement just right. Overall, it was essential that I kept communicating with both Suloni and Professor Kappelman to make sure that everything looked satisfactory. It was a lot of work but it was more than worth it after being able to see my work published. This is definitely one of the examples of where being an STA has given me amazing opportunities.