Hello, My name is Dave Johannes and this is my second year as an STA. I’m Junior majoring in Urban Studies and a minoring in Architecture. I’m also in the Bridging Disciplines Program pursuing a Certificate in Digital Arts & Media. I enjoy photography, browsing ebay for bargain camera equipment, movies, video games, and cycling. Check out my My Site/Blog where I update on my photographic adventures and post my general thoughts.

November 11, 2009
New Mockups for Rhetoric and Writing Banner in progress

October 7, 2009
Took and edited photo for Office of the Dean – Gebauer Building. Edited exposure levels, colors, and fixed the perspective due to lens distortion. Original image

September 29, 2009
Finished Remaking Database for Emily for CREES, LILAS, and SAI Made this:

-Met with Emily. Working on editing raw data for the Lending Libraries Project

Made Banner Mockup for TILTS

May 5, 2009
Worked on screencasting
Need to figure out best settings (quality vs. file size)

In this tutorial, you will learn how to create a High Dynamic Range (HDR) image using three photographs of the same scene taken under different exposures, and to process it with tone mapping and exposure fusion.

Note: Photomatix allows you to process a single image with tone mapping, but this tutorial only covers HDR processing with multiple exposures. Note that a single image is not sufficient to capture the dynamic range of a high contrast scene.

To create the best HDR images, you need to take enough exposures to properly cover the dynamic range of the scene.

If your camera offers Auto-Exposure Bracketing (AEB), select the Continuous Shooting mode, make sure the camera is set toAperture Priority, and select an exposure increment of +/-2. The camera will automatically vary the shutter speed each time the shutter button is pressed, taking several exposures spaced by two-stop increments.

You may have to change the exposures manually if your camera does not offers AEB, or if it can only take 3 auto-bracketed frames when the dynamic range of the scene requires 5 or more.

Photomatix enables you to align images if the camera moved slightly between frames, but using a tripod is still recommended. 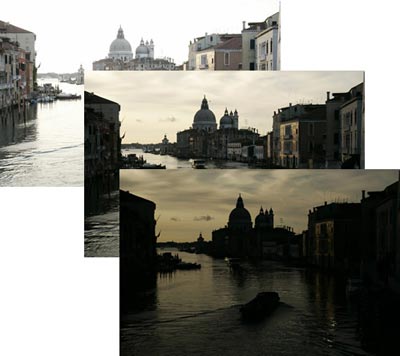 The easiest way to load your differently exposed photos is to select the files with the Finder and drag them together to the Photomatix icon on your Dock.

You will then get a dialog asking you what you would like to do with the dragged files. SelectMerge for HDR processingand click onOK.

The next dialog lists the files selected. If necessary, you can remove files or select others. 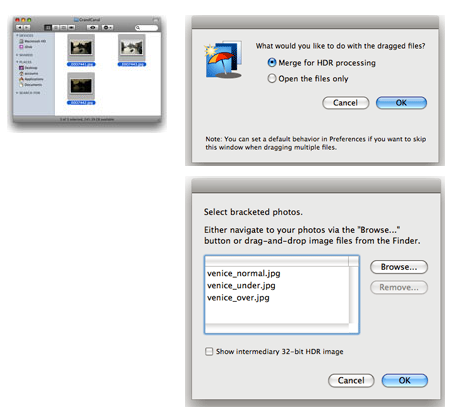 Step 3: Preprocess and merge the photos

The next window lets you specify options for preprocessing and merging the photos.

If your photos were taken hand-held, check theAlign source imagesbox and select theBy matching featuresmethod. The three photos of the Grand Canal were taken using a tripod, but we still check the alignment option to correct for small alignment problems that may happen even with a tripod.

If the bracketed photos you loaded are RAW files, check theReduce noiseoption with theon source imagesselected. You may also check this option with jpeg or TIFF files.

Step 4: Adjust the image to your liking

TheSettingswindow on the left lets you adjust the process, method and settings. There are two processes:Tone Mapping, which is applied to the merged 32-bit HDR image, andExposure Fusion, which combines the source photos directly.

ThePreviewwindow on the right shows a preview of the final tone mapped image. You can adjust the preview size using the radio buttons on top.

It is important to note that the preview is only an approximation — the final result may slightly differ in the case of the Details Enhancer and Fusion/Adjust methods.

The buttons at the bottom of theSettingswindow let you undo or redo settings, restore the default settings, and load and save presets.

You can also access presets directly by clicking on the thumbnails of thePreset Thumbnailspanel. The “Built-in” presets show by default. 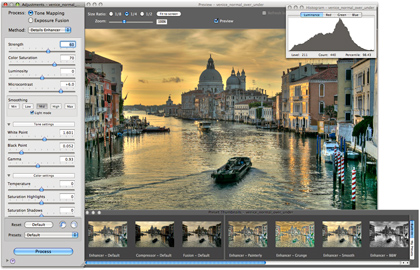 Try different processes and methods with your image.

TheExposure Fusionprocess tends to produce more natural-looking results and has the advantage of reducing noise.

TheTone Mappingprocess is the most versatile, offering a large variety of styles, or “looks”, depending on the method and settings.

For a detailed tutorial on using the settings, please refer to thevideo tutorialon Tone Mapping.

Once you are satisfied with the method and settings, click on theProcessbutton so that you can thensavethe image. 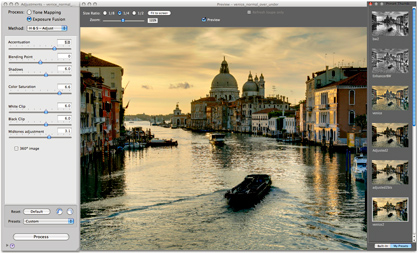 Step 5: Save the image

The Preview shows a low resolution representation of the image. To save the image at original resolution, you will have first to process it with the adjustments you selected. To do this, click on theProcessbutton located at bottom of theSettingswindow.

Once the processing has completed, chooseFile > Save As.

The processed image is in 16 bits/channel mode. However, you can choose to save it as 8-bit JPEG, if desired. Saving as 16-bit TIFF is recommended for further processing.

So you have some walk-in work. A professor (let’s call him/her Prof Client) wants a personal site done, hosted on their webspace. How do you give yourself access to Prof Client’s webspace so that you can make edits and changes? This handy tutorial will show you how. 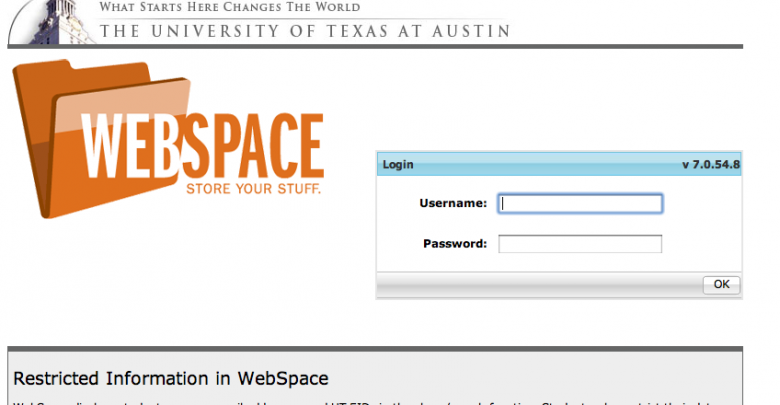 PRO TIP!!!!!! I find web development easier if you mount the server in finder in OSX. To do this, “Connect to Server…” in Finder (same as how you connect to the STA volume) and type the following into the server address (replacing the fields in the brackets as necessary)

Press connect, login with your eid, and magically you now have mounted the directory.

Hope you found this Pro Tips Tutorial helpful, which makes you like, a pro now too.