Welcome back to another installment of Texas Beyond History: A Rusk Country Map Story, ft. special guest Canvasser… So, as you might remember from a few posts ago, I was tasked to develop an interactive image through Canvasser for a new Texas Beyond History page. The image in questions is meant to be a map (black 7 white) with colored-in spots to let the user know that those are the interactive spots. Once the user clicks on them, a new page [for every element] will open up on a new tab of the user’s browser with pictures and information about each of the special locations.

Since last time, we have gone through a bunch of different updates on the project. After I had my initial conversation with the client I started working on the map on Canvasser. That is, until I stumbled upon the first obstacle: what Canvasser feature would be the most appropriate to use for these click elements? I was lucky enough to get some feedback from a fellow STA on that… but then came the second obstacle: who was going to make the external links (the ones that will pop open on a new tab after clicking on the map locations)? And if that were to be me, how would I do that? That question right there sparked a whole new phase in the development of this project. This new era being defined by various meetings, not only with myself and Suloni, but with the web development team. After the initial meeting with this new team, we came to a few conclusions and some new questions for the client. So, I drafted a new email and sent it over his way.

Over the weekend the client responded to my email. As soon as I started my shift on Monday, I let the rest of the team know of his response. At this point we were not sure Canvasser would be able to carryout the needs of the project, and we were thinking of finding an alternative program to build the map with, but the client’s response made it very clear that we would need to use Canvasser. So I got back to business using the method my fellow STA had suggested earlier, which was the loadpage feature. I also got a suggestion by someone else in the team, but sadly that feature of Canvasser is not working properly. 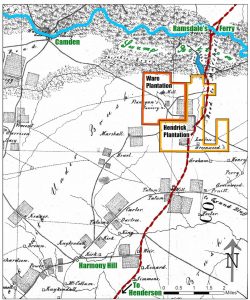 Moving on with loadpage, I was able to get far with the map’s interactive elements. But a problem remains: due to a security measure implemented by different browsers, the feature that lets a new tab pop open requires that the user clicks on a security text first. Needless to say, that’s not ideal. So, the project phase we are currently at is finding workarounds to this inconvenience.

You can see the current Canvasser Interactive by clicking on the map to the right, or right here. As of right now, most of the clickable elements are working the loadpage feature and dealing with the additional clickable text issue. There are only three exceptions. First, the of you click on the Camden text, a new button will pop up. I was trying to work around the issue previously mentioned, but I accidentally ended up adding an extra step with the button; so that was a fail. Second, the hotspot on the Hendrick Plantation works just as the rest, except that the background color that appears with the security text is orange, rather than transparent. Finally, Ware Plantation is working smoothly through an alternative loadpage event that activates new pages opening up on the same tab rather than a new one. Feel free to put all of these to the test! (Bear in mind that changes will be coming soon, so those actions won’t last forever.)